The remains of a WWII Panther tank have been uncovered in Chrostkowo, Poland, by local history enthusiasts who are keen to put all of their finds of tank parts together in a museum, permission pending. The trail that led the group to the tank started with the discovery of a piece of tank track.

It is thought the tank was abandoned by German soldiers, who were part of the fabled 7th SS ‘Ghost Division’, on the 23rd January 1945 as the Russian forces advanced, beating down Hitler’s Eastern Front. Rumour has it that it was stopped by a Polish shell and then later blown up by members of the 70th Army of the 2nd Belorussian Front.

The fact that parts of the tank were discovered over a very wide area, some items have been found more than a kilometre apart, suggests that the destruction of the tank must have been an extraordinary sight.

Local man Konstanty Kiżyński, told local historian Tomasz Stefański that the tank’s gun had lain in a ditch beside a road for many years. Stefański is the president of the Przedmoście, the Society for Historical Explorations. The gun had been painted with circles. 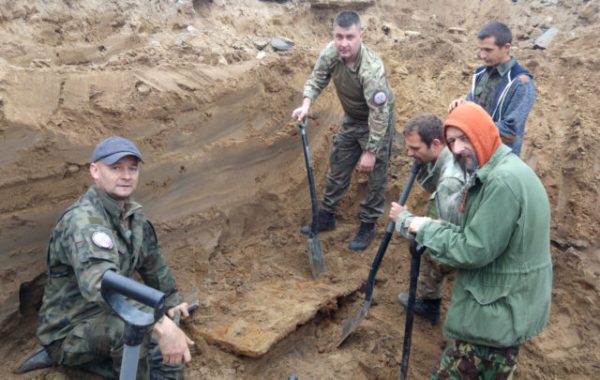 ‘Such markings were used in case of destroyed enemy vehicles,’ said Stefański, ‘perhaps it was some kind of a small Russian revenge.’

It was also reported that the tank had been covered in a putty-like substance, which Stefański postulates was most likely to be Zimmerit, a protective coating against magnetic anti-tank mines.

Over time some parts have been lost forever, most notably a set of wheels which were dismantled and scrapped by one villager, while many other metal parts have also gone the same way. A 39kg piece from the gun was taken away and used as an anvil by a local blacksmith.

The Panther tank was designed as a response to the Soviet’s T-34 and was intended to replace the Panzers III & IV and it fought alongside both the IV and the Tiger from 1943 to the end of the war. Historians rate it highly for its balance of firepower armor and speed but the tank’s reliability let it down.

It was faster than the Tiger and was equally protected from attack with thinner, but steeply angled hull armour at the front. Over rough terrain it could out-run it’s heavier stable mate and performed well in open country and in long-range bombardments. Its weakest point was vulnerability to flanking attacks.

As the war wore on and Hitler’s war production began to suffer the Panther struggled with reliability issues. Quality alloys for key components became scarce and production plants were lost to Allied bombing raids.

The design was streamlined in order to improve production rates and counter shortages of raw materials, but fuel shortages, lack of training facilities and dwindling supply of good tank crews meant that the Panther tank, and Panzer Divisions in general, were becoming less effective as the war drew to a close.

Members of the historical society also confirmed they had discovered ten 75mm KwK 42L/70 Shells, which would have been fired by the tank’s Rheinmetall-Borsig gun. Their research has also uncovered a report by the 1st Battalion of the 562nd Regiment, 96th Corps, 70th Army.

This document sheds light on the local battlefields with a report by Captain Ivan Malko detailing the discovery of the abandoned Panther as their column advanced through the Polish countryside.

‘We want to reconstruct the tank’s frame and fit in the remaining parts,’ said Tomasz Stefański, ‘over the five years of our operation we have found quite a lot of military equipment (and we) are not going to stop our searches.’

Another Article From Us: The Armored Cars America Provided for the Allies in WWII

The historical society are looking for new sources of funding for their work all the time and interested parties are encouraged to get in touch via email for all the latest news on how the project is going at przedmosciegd@gmail.com