The thing that scared allied tankers the most during World War Two was the Tiger I. The Tiger had thick armor and an 88 mm gun capable of destroying a Sherman tank from over 3000 metres away.

As most Allied tanks needed to be within the hundreds of meters away to have a chance to penetrate the armor of a Tiger, fighting one was a dangerous task.

The original rather long winded name for the Tiger I was the Panzerkampfwagen VI Ausführung H or E depending on the variant. Ferdinand Porsche (founder of the car brand) gave the tank the nickname Tiger. After the introduction of the Tiger II, the Roman numeral I was added to the Tiger I.

The Tiger I was first used in North Africa in 1942, and they would continue to serve in many places until the end of the war.

The fear the Tiger put into Allied crews meant they experienced ‘Tiger  fever’. This was where any enemy tank spotted was reported to be a Tiger. This however is highly unlikely as only 1,247 Tiger Is were built during the war, compared to 50,000 Shermans.

Even though production stopped in 1944, the fearsome Tiger could comfortably handle any tank fielded by the Allies throughout the entire war, and in some cases tanks made afterwards. They were not perfect though, as their complex engineering and heavy weight led to slow production and break downs in the field. The complexity also made them hard to fix without a full maintenance depot.

They also consumed large amounts of fuel, not a good thing for a country rapidly running out of this precious wartime commodity.

Once the war ended, many Tigers were simply cut up for scrap, meaning very few remain; only 7.

This Tiger is historically significant, as it was the first Tiger to be captured intact by British forces when the crew abandoned it in Tunisia in 1943. Up until that point, German crews had followed strict orders to completely sabotage Tiger tanks in order to prevent their capture and subsequent inspection. At the point Tiger 131 was captured, this type of vehicle was essentially still a top secret weapon.

The capture of 131 removed the veil of the unknown about this new tank, and provided invaluable intelligence to the Allies. The fate of the crew remain unknown, with a note in the crew’s unit diary simply saying: “Crew members of Tiger 131 panic and abandon the tank after two harmless hits from a Churchill.” The extensive damage that can still be seen on the tank seems to give good reason for abandoning the tank however.

A 6pdr shell struck the under side of the 88 mm gun, deflected down into the bottom of the gun mantlet and lodging into the turret ring. This was a critical blow to the tank, as it jammed the turret preventing it from traversing. A tank unable to aim its gun is as good as dead.

This shot also sent shrapnel inside the tank, reportedly destroying the radio. It is also theorized this could have injured the driver and radio operator. 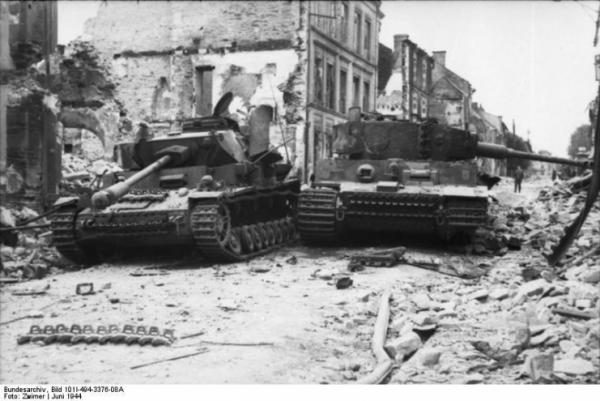 Another Article From Us: 40+ Images of Knocked out M4 Sherman tanks