Before the Cold War, the Second World War saw tank designs rapidly improve between 1939 and 1945, as all sides had heavily integrated tanks into their forces.

This pace of development didn’t stop in 1945 however, as after Germany’s defeat, the Soviet Union became the bigger threat to the West; a period of fragile peace known as the Cold War. Both sides continued on from WWII designs to produce bigger, faster and more powerful tanks. Here are 4 early US tanks involved in the Cold War.

The M24 Chaffee was a later war tank that was created to replace the aging M3/M5 Stuart series of light tanks, a design that by 1943 standards was under gunned and under armored to survive on the dangerous battlefields of mid-late WWII.

The Chaffee was a small vehicle that implemented everything the US had learnt up to that point in the war, with torsion bar suspension, a powerful powerplant, sloped armor, improved crew ergonomics, low profile and a lightweight but effective gun, it was a clear departure from previous designs. 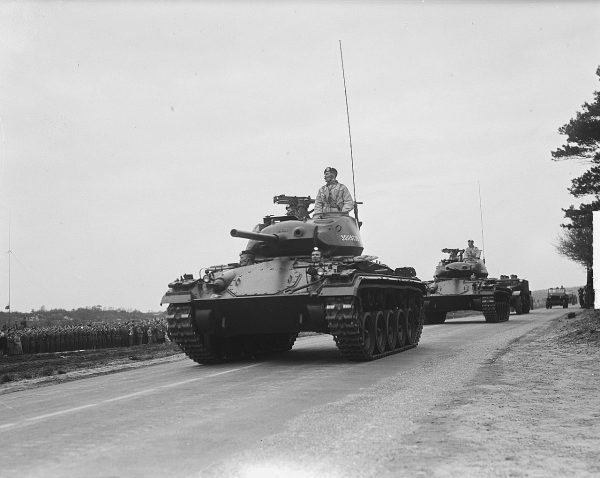 The Chaffee used the M6 75 mm gun, which was a lightened version of that in the Sherman. The tank was protected by highly sloped 25 mm of armor on the front, not a great amount, but the Chaffee was a light tank and wasn’t meant to be directly engaging anti tank weaponry.

Twin Cadillac V8 engines enabled the Chaffee to hit 34 mph on the road. It entered service in late 1944, only seeing the last months of the war.

The Chaffee made its name in the Korean War, where it proved to be an effective fighting machine. It was supplied to several countries as military aid. The US used it up until the early 1950s during the early stages of the Cold War, but it was still in use elsewhere at the end of the 1970s.

Another one from WWII, the M26 Pershing was a heavy tank built to match the German Tiger and Panther tanks seen during the latter half of the war. It did this satisfactorily, but still wasn’t a match for tanks like the Tiger II and Jagdtiger.

It used a 90 mm M3 gun, which was comparable in power to the Tiger I’s 8.8 cm KwK 36 L/56. It could penetrate the front of a Tiger I from over 1000 meters away, but required specialised tungsten rounds to damage heavier tanks like the Tiger II.

It also had 100 mm of armor over the frontal hull and turret, some of which was quite well angled, and 75 mm on the sides. This was much better than the Sherman tank, but again about equal to the Tiger I.

It weighed 46 tons but was powered by the Ford GAF, a large petrol V8 similar to that used in the M4A3 series of Shermans, a tank that weighed 10 tons less, resulting in the Pershing being underpowered. It would later be re-classified as a medium tank. 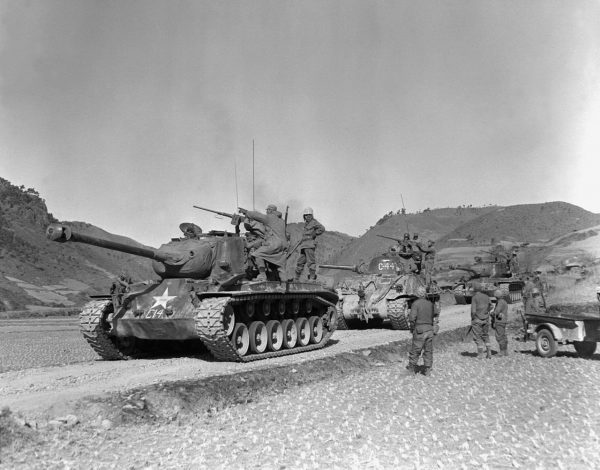 The M26 used torsion bar suspension, and a rear mounted transmission and drive sprocket. This layout would pave the way for all future US main battle tanks, and is still used on the M1 Abrams today.

The M26 saw very minimal combat during WWII and is often regarded as a lacklustre design, but it left a lasting legacy that is still around today on US tank design, as the M46, M47, M48, and M60 all share strong lineage to the M26.

Like the Chaffee, the Pershing saw more extensive use in the Korean War. Its poor power to weight ratio meant it struggled on the difficult terrain, and so it was phased out in the early into the Cold War in the 1950s.

This vehicle began its design in the post WWII US in 1946, when a programme was started to make a replacement for the M24 Chaffee. This programme would be called the T37. However the lack of a war meant there was a low urgency for new equipment, slowing development until 1949 where a prototype was built.

The tank carried a 76 mm gun which was powerful enough to deal with many non-heavy Soviet tanks, and a 500 hp 6 cylinder air cooled engine, which gave it a top speed of 45 mph. It did weigh 25 tons however, and almost crossed the lines between a light and medium tank. Ironically during WW2, the T7, an attempt at replacing the M3/M5 Stuart tanks, weighed 25 tons, and was rejected for that reason.

Orders were placed for the tank in 1950 under the designation M41 Walker Bulldog. The vehicle was intended to serve not only as a light tank, but offer other variants like a self propelled anti-aircraft gun and an armored personal carrier.

The M41 would be replaced in US service by the M551 in the 1960s, but it still remains in service in a few countries today, albeit highly modified.

The M47 was technically the final development of the M26 Pershing. The M46 was designed as a stop gap to solve the shortcomings of the M26, which it did, but it was regarded as under-gunned and under-armored after the fighting in Korea. The replacement was meant to be the T42, a under-powered medium tank that eventually proved to have mobility equal to WW2 medium tanks, and the idea was scrapped.

With the intended replacement for the M46 now gone, the US needed better armament and armor quick. The decision was made to take the turret designed for the T42, and place it onto the hull of the M46 – making the M47 Patton, another stop gap.

This was a needle nose turret, offering improved armor and a smaller target to hit. It was armed with a 90 mm M36 gun and an M12 optical range finder. The hull front was slightly redesigned, with the 100 mm upper glacis now sloped to 60° which gave good armor protection. The M47 Patton was the last US tank to feature a bow mounted machine gun.

The tank suffered set backs in its design process, meaning it barely arrived Korea before the wars end. It was a good tank design with good capabilities, but has been over shadowed by the later M48 and M103 tanks. M47s were relegated to mainly training roles, meaning it saw a short production life between 1951 and 1954.

Part 2 explores the later tank designs most remembered from the Cold War –  including the M48 Patton, M60, M103 and M551 Sheridan.