The T-34 tank was the Red Army’s workhorse of armoured warfare during the Second World War and even made up the bulk of Soviet armoured vehicles in the post war period too.

The T-34 enjoys almost mythical status in Russia today, and is widely considered the best tank of the war by many historians. So what was it that this tank got right? How did this 30 ton beast hold off and push out the invading German forces on the Eastern Front?

Tanks without infantry support are sitting ducks to enemy fire, but during an attack they can advance quicker than troops on foot and suddenly find themselves alone without support. 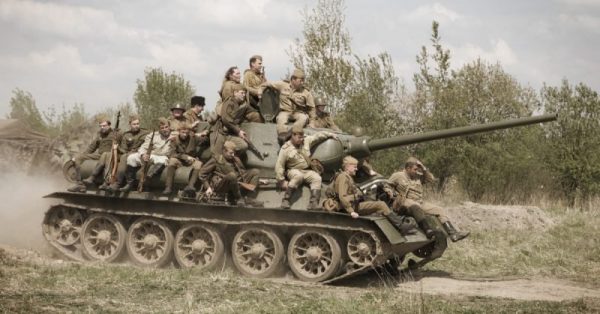 During World War 2, the Red Army lacked dedicated armoured personnel carriers to keep up with the armoured advance, so they employed a tactic known as tank desant. This is the rather scary method of a tank entering battle at speed while externally carrying a group of soldiers.

Many T-34s left the factory with bars fixed to the sides of the hull and turret for stowing the crew’s gear and equipment, but also acted as convenient handlebars for troops to hold on to.

The T-34 was not an extremely reliable tank, with transmission issues, tracks snapping, turret rotation gear failure and useless engine air filters the tank was often out of service. This however was partly remedied by it’s ease of maintenance.

When things did break, there were huge sources of spare parts, and parts can simply be swapped out or replaced. This is unlike the German ‘Big Cats’ where replacement parts often had to be custom machined to fit.

The V-2 series of engines ran on diesel and therefore significantly reduced the risk of fire when penetrated by an enemy round.

Tanks fighting in extreme cold had trouble starting their engines, as engine oil thickens to a sludge and their batteries lost power, making it hard to turn over with a conventional starter motor.

When the starter motor wouldn’t budge the engine, the T-34 used a compressed air ignition system to fire air into the cylinder at high pressure to crank the engine over.

With wide tracks, Christie suspension and aforementioned power to weight ratio, the T-34 had great off road performance.

Christie suspension allowed much greater suspension travel when going over an obstacle, smoothing the ride of the tank on rough terrain.The wide tracks spread the vehicle’s weight over a large surface area allowing it to drive over soft terrain.

In testing, the T-34 proved it could tackle tough obstacles too, as it was able to knock down pine trees up to 900 mm thick with a running start.

Originally starting with the 76.2 mm L.11 gun, the T-34 received a few offensive upgrades during its lifetime. It was quickly found this gun had poor anti-armour performance.

In 1941 the L.11 was swapped with the far superior F.34 which could comfortably penetrate even the thickest areas of both Pz. III and Pz. IVs at normal combat ranges

This gun would be mounted on the majority of T-34s during the war, but when they came face to face with later German tanks like the Tiger 1, Panther and King Tiger the T-34 was again outmatched, requiring the upgrade to the 85mm D-5T in 1944.

This is in contrast to the Tiger 1, a superior tank in many ways, but had limited upgrade potential, and was only in production from 1942 to 1944.

The T-34 was easy to adapt for specific tasks, with variants produced by the Soviets during the war being: a crane, armoured recovery vehicle, a workstation, and a mine clearer. Two turretless tank destroyers, the SU-85 and SU-100, and the SU-122 self propelled howitzer were built on the T-34 chassis.

When the Germans encountered the T-34 in 1941, they found the tank to be an impressive creation, however, it was not it’s mobility that stunned them, nor it’s firepower. They were stunned by it’s armour. At only 26.5 tons, the T-34 had great armour compared to equivalent tanks from other nations.

While sloping armour was a technique already known around the world, the Soviets used it to great effect on the T-34. Sloped plates increase the amount of armour an incoming round must travel through, without increasing actual armour thickness.

With all the great features of the T-34 listed so far, it still couldn’t match later German tanks one on one. What it did have on it’s side, more than any other tank of World War Two, was numbers. The Soviets produced a staggering 57,000 T-34s between 1941 and 1945.

To increase production designers worked to reduce components and complexity, while each factory would take their own measures to simplify construction and reduce assembly times. It was noted that during the production run of T-34s, the F.34 gun’s 861 parts were reduced to 614.

These differences mean it’s hard to give designations to T-34s as two supposedly identical tanks from two different factories will be vastly different.

Perhaps the greatest thing about the T-34, is it’s influence on armoured warfare. When the Germans met it on the Eastern front, they immediately set about making a counter to it with the Panther. Most of its design elements were known about previously by other nations, but at the time no tank had so boldly incorporated so many features.

Up until the recent introduction of composite armour, almost every single significant tank after World War Two incorporated sloped armour.

Another Article From Us: The Mind Blowing Statistics of the T-34

Diesel engines have since been a mainstay, and had war broke out between the East and West during the cold war, Soviet tank forces would have employed similar tactics to those against Germany in the Second World War.